This year, according to a poll by PersonalCapital.com, only 74% of Americans were expected to celebrate Thanksgiving because 1 in 4 Americans are skipping the holiday to save money…

In 2021, researchers noted that an IPSOS survey found that nine in 10 Americans planned to celebrate Thanksgiving. This year, the new poll of 1,000 people found that the number has fallen to just 74%. In fact, 47% say they are celebrating “Friendsgiving” because of its more budget-friendly menu. Specifically, just 24% of Friendsgiving celebrations will have a turkey on the table, with 33% opting for a pizza instead!

Notice the dramatic rise in the cost of Thanksgiving over the past few years:

What a difference a few weeks makes!!!

After a brutal September, the stock and bond markets have been positive during most of October and November. So are we in a new bull market?

As we have mentioned in the past few Market Outlooks, the stock market has performed positively due to a weaker and lower interest rates.

Many of you are also aware that one of our investment strategies moved into ( bonds) a couple of weeks ago. 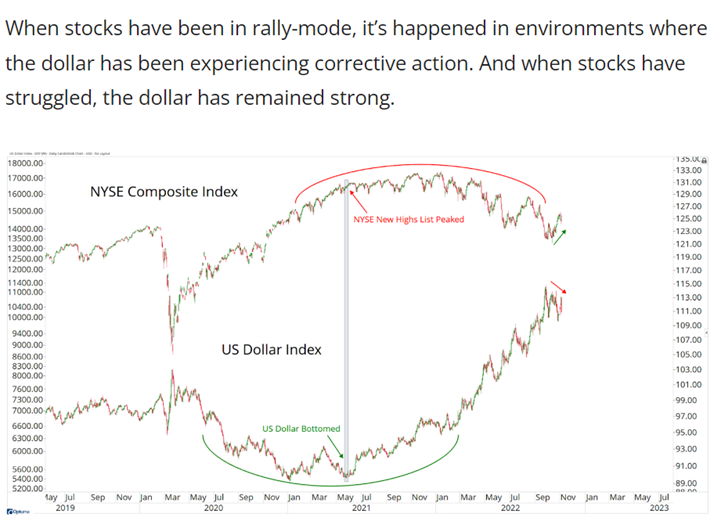 We have had a substantial rally, especially in the longer end of the yield curve. Specifically, it has been profitable for our subscribers to be invested in the TLT ETF.

After bottoming in late October at around 92, TLT closed at over 102 Friday. That is approximately a 10% return in the 20-year Treasury bonds in less than a month. Clearly, this has been providing a good tailwind for stocks that have rallied along with bonds. See the chart below: 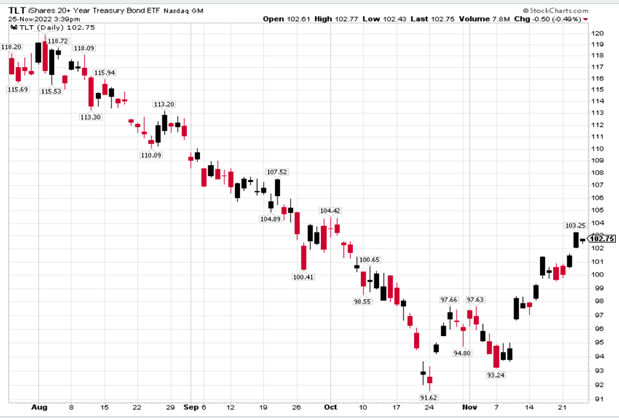 However, we are not as optimistic that interest rates will stay in “rally” mode and that the decline in rates will continue. With 2-year interest rates hovering in the mid 4.5% range and 10-year bonds around 3.8%, the inverted yield curve that began in early summer continues. Most economists on Wall Street interpret this as suggestive that we will see a recession in 2023. How badly this economic downturn is anyone’s guess.

Additionally, with the Fed expected to continue raising rates, it is highly likely that the Fed’s overnight lending rate will creep up to 5.0% (or higher) in early 2023. Eventually, the severe inversion will close its gap, and longer-term interest rates could be “pulled” back above 4%.

On Friday, Goldman Sachs economists suggested that rates will stay in the 4% range for all of 2023.

The stock market is in rally mode.

Our indicators continue to be positive (more in Big View below). Many of the technical indicators we follow indicate that the market could continue a move higher. One example is that most of the sectors of the Economic Modern Family have entered short-term bullish phases. 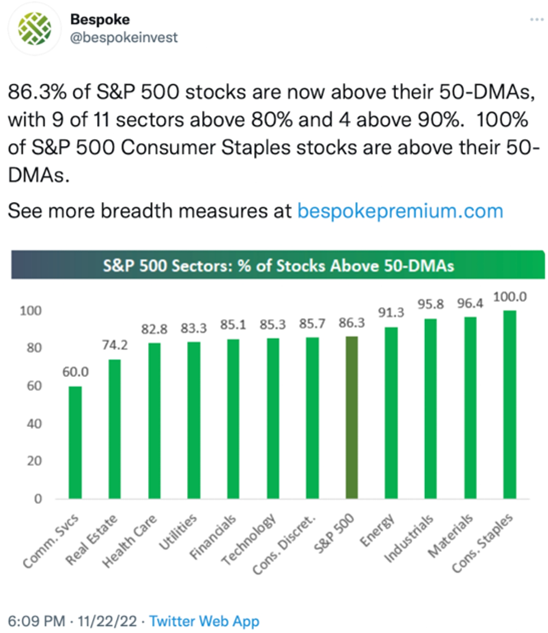 Additionally, we have seasonal factors, which we have been sharing with you in the past few Market Outlooks.

Specifically, the fourth quarter, after a mid-term election (of a President in their first term) has historically been a positive time to invest in stocks.

However, one word of caution, most of the periods considered in this statistic did not have high inflation and rising interest rates as headwinds. Nonetheless, see the chart below indicating the favorability of this season: 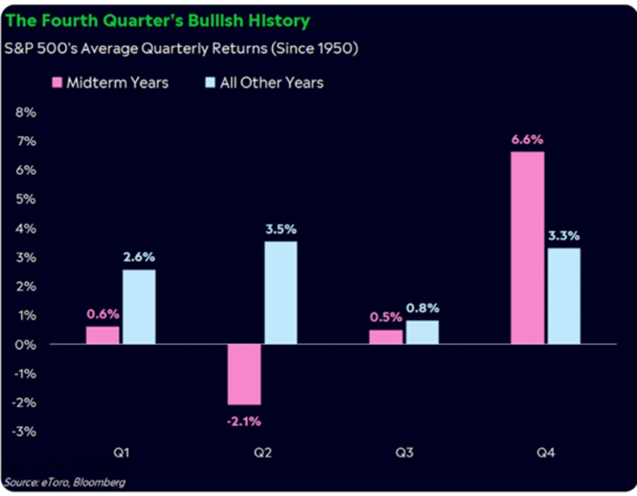 Should We Stop Playing Defense and Get Aggressive Now?

There are very opportunistic ways to invest right now, and we’ll cover them below, but first, it’s important to recognize that it’s not yet time to be “aggressive,” and it’s important to acknowledge the risks of being in stocks, bonds, and other asset classes considering the economic headwinds.

Most economists from the largest firms on Wall Street have recently commented that we may only be 1/3 into this economic slowdown, and the next 2/3 will come in the first half of 2023.

Prompted by discussions about monetary policy, many of these economists believe that

1) The Fed is not done raising rates, and
2) Inflation remains elevated and not going to hit the Fed’s 2% target anytime soon, and
3) Higher labor, manufacturing, and borrowing costs will certainly slow the economy down.

As a result, a profit recession from many public companies should be expected, especially by companies that are multinational and affected by the dollar.

These factors will negatively impact earnings, and the market will have to readjust. Typically, in this environment, stock multiples contract, leading to lower stock prices.

We’re focused on the fact that this may be ‘the next shoe to drop.’

Here are some additional warning signs that may be leading indicators of the economy’s continued slowdown:

This behavior is eerily reminiscent of 2008. Mortgage debt, auto loan debt and credit card debt all skyrocketed, and so when the economy finally crashed suddenly there were millions of Americans drowning in bills that they were unable to pay. Well, now it is happening again.

In a video with over 380,000 views addressed to “anyone inside this company that actually cares,” TikTok user Travis Bennett shows the conditions of his Dollar General. This includes boxes filling the aisles and numerous crates that have not been unpacked. Bennett says this is typical for “most Dollar General stores across the country.”

In fact, Bank of America is projecting that job losses in this country will soon hit 175,000 a month. Pressure from the Fed’s war on inflation builds, will begin shrinking early next year, translating to a loss of about 175,000 jobs a month during the first quarter, the bank said. Charts published by Bank of America (NYSE:) suggest job losses will continue through much of 2023.

“The premise is a harder landing rather than a softer one,” Michael Gapen, head of US economics at Bank of America, told CNN in a phone interview Monday

It is very apparent to us that we continue to have very hot inflation that the Fed will take all actions to bring down. Two weeks ago, the St. Louis Fed President, James Bulliard (a voting member of the Federal Reserve rate setting committee) commented:

To most, interpreting these comments means the Fed stays on an aggressive rate rising position and could raise another 75 basis points when they meet again in December.

Stifel, Nicolaus & Co. (a large National brokerage firm headquartered in St. Louis) economists Lindsey Piegza and Lauren Henderson said they think that even a 7% fed-funds rate may be “understating” how high the Fed’s benchmark interest rate likely needs to go.

How To Invest (and Win) In A Bearish Environment

Gaugers, these hawkish actions coupled with an economy already showing weakness, is not the recipe for a buy and hold stock strategy.

Right now, investors must put on their “trading” and active management pants and capture profits while being nimble and constantly managing risk. The market can, has and will turn on a dime.

The great value investor, Benjamin Graham, who contributed so much to stock analysis and whos’ work is still widely used today, said it best: 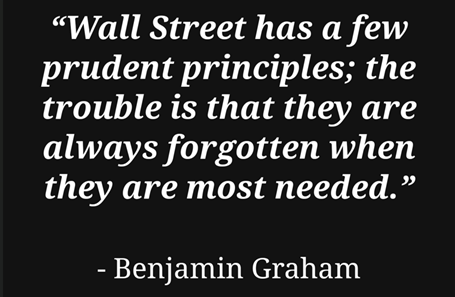 Please note that while there are obvious and apparent signs of a troubling economy, MarketGauge has several investment strategies that have performed well during 2022 and even better for the long-term when optimally blended together. Several of these blends have produced excellent comparative returns during 2022.

Moreover, our own Mish has appeared numerous times on National TV Business shows extolling the virtues of investing in commodities this year. In fact, she has been on the record several times suggesting that we may be starting a commodity super cycle. Please review the asset category chart below to see how commodities rank among all asset classes. Several of the MarketGauge strategies incorporate commodity ETF or commodity-oriented stocks in their investment thesis.

We often say, “there is always a bull market somewhere.” More importantly, ask yourself if the annualized returns to the right for each asset class are going to sustain you or prepare you for retirement in the future?